About I’m a Scientist

I’m a Scientist is like school science lessons meet the X Factor! School students choose which scientist gets a prize of €500 to communicate their work.

Scientists and students talk on this website. They both break down barriers, have fun and learn. But only the students get to vote.

This is the Lithium Zone. It has a range of scientists studying all different topics. Who gets the prize? YOU decide! 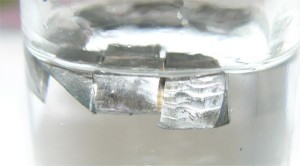 Discovered in 1817 and named after the greek word, “lithos”, meaning “stone” (usually this kind of metal was discovered in plants, but Lithium was found inside rocks), Lithium (lith-ee-um) is the lightest metal and will even float on water.

It’s unlikely that you’d ever stumble upon a piece of lithium in the open air as it is very reactive; it reacts with water and nitrogen in the air. This is why it is usually stored under oil, to stop it from reacting. If you left a lump of it out in the open, it would begin to smell of dirty nappies due to the ammonia it produces reacting with nitrogen in the air. 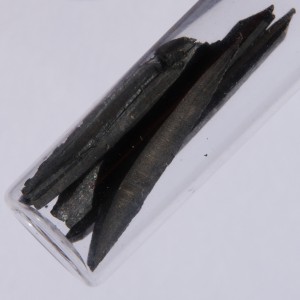 Lithium with a dark nitride layer after being exposed to air. [Image: Wikimedia/Jurii]

Freshly cut—and it’s so soft that you could cut it with a knife—lithium is a shiny, silvery-white colour, but after just a few moments, it turns a very dark grey; this is it reacting with the air. When the lithium is placed in a bowl of water, it will float on top and fizz, giving off hydrogen gas. Lithium is the first alkali metal (this means it is in the first column on the periodic table), as you go down the column, the metals get more and more reactive, caesium, for example, reacts explosively in water.

As for its uses, lithium is used as a drug to treat manic depression (hence the Nirvana song, Lithium, also the rubbish Evanescence one), and lithium ion batteries are commonly used to power mobile phones.

Teachers don't need to book, and students are free to drop in and talk to the scientists.. If they have any burning questions or haven't yet experienced a live chat.